You may be surprised at just how many Christmas traditions from Germany have spread all over the world.

Today we are having some fun by looking at how they celebrate Christmas in Germany so that you can have your own fun German Christmas this year or at least adopt a tradition or two to spice things up!

Let’s start our look at the way they do Christmas in Germany by looking at some of the most common and exciting traditions they partake in during the holidays.

When Is Christmas In Germany?

Like other Christian countries, Germany celebrates Christmas day on December 25th. Their structure for celebrating Christmas is very similar to many other Western countries such as the UK, the USA, and Canada.

Decorating The Tree On Christmas Eve 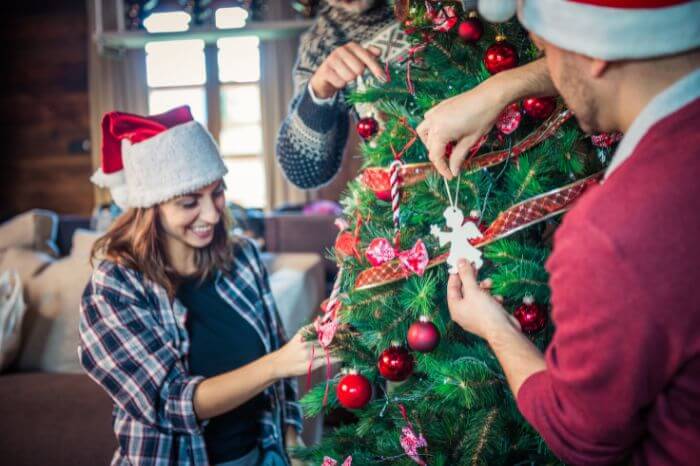 Granted these days this is one of the German Christmas traditions that are not as common as it was years ago. However, there are still many that will leave decorating the tree until Christmas eve.

Christmas eve in German is actually a really big deal and the main event of it has been traditionally decorating the tree on Christmas eve. Those who do still follow this tradition will still decorate the rest of the house before Christmas eve and then leave the tree until last. 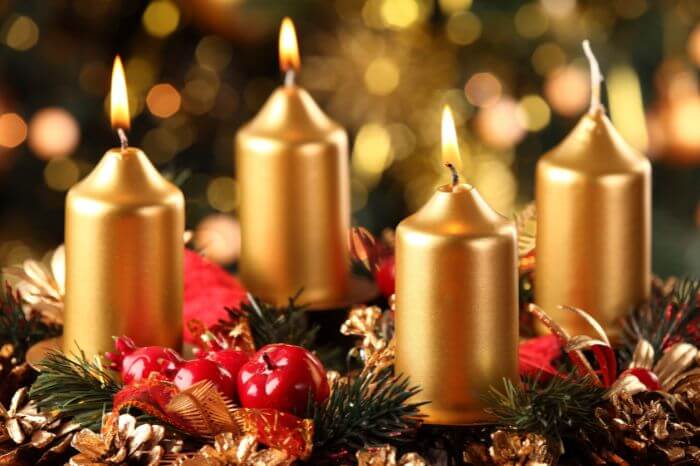 The term Adventskranz means advent wreath and this is a tradition that dates back all the way to the 16th century. The idea here is that the wreath will be made with pine cones, berries, and dried flowers.

There will be four candles and a series of decorations too. Truth be told, no two Adventskranz will ever be the same!

Each Sunday leading up to Christmas one of the candles on the Adventskranz will be lit with the last one in the middle being lit on Christmas day.

Sternsinger is the German version of going Christmas caroling and the translation basically means star singers. This is very popular with children as they will dress like wise men and go around the neighborhood singing Christmas carols.

More often than not children do this with the hope of getting a little tasty treat for their singing talents! 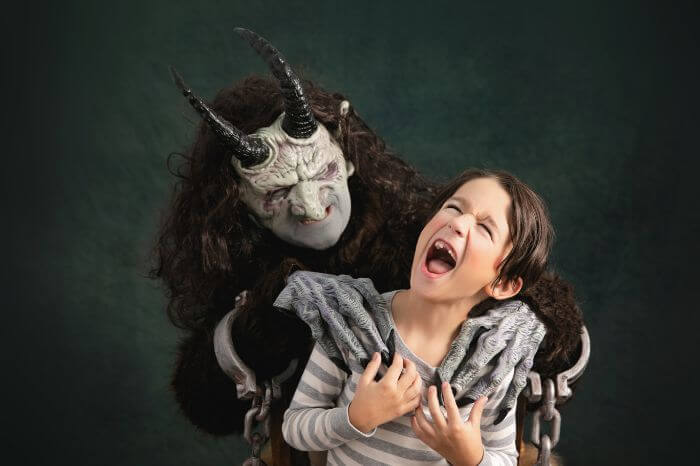 Ok, so if you have kids, you may want to give this one a miss, but let’s face it the story and legend of Krampus is one of the coolest and most interesting German Christmas traditions, heck they even made a big-budget Hollywood movie about him.

Think of Krampus as the “anti-Santa”. He is a half-goat half-demon being that punishes Children for being bad during Christmas time!

No doubt there are still a few German parents who will use Krampus as a way of keeping their kids from being naughty during the holidays!

Want to know how they decorate when it comes to Christmas in Germany? Here we are looking at some of the fun things that the people in Germany do to spruce up the old “Heimat” during the holidays. 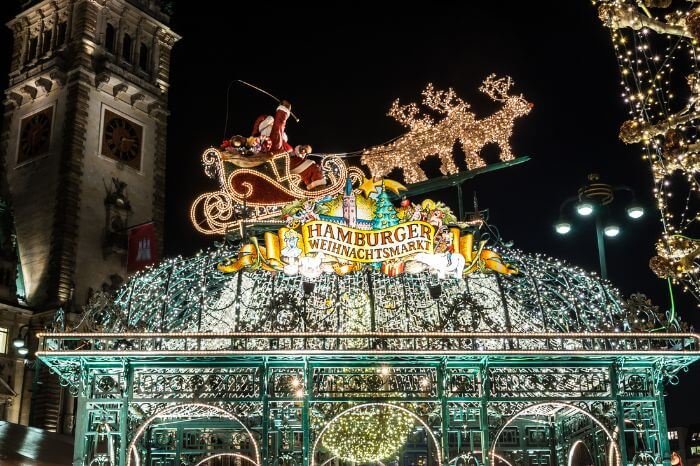 We have to start by talking about the most German of all German Christmas traditions and that is the German Christmas market. Most towns will have one of these pop up these days and they are probably the best place to go to in order to purchase some authentic German-style decorations!

An Angel Gets Its Wings 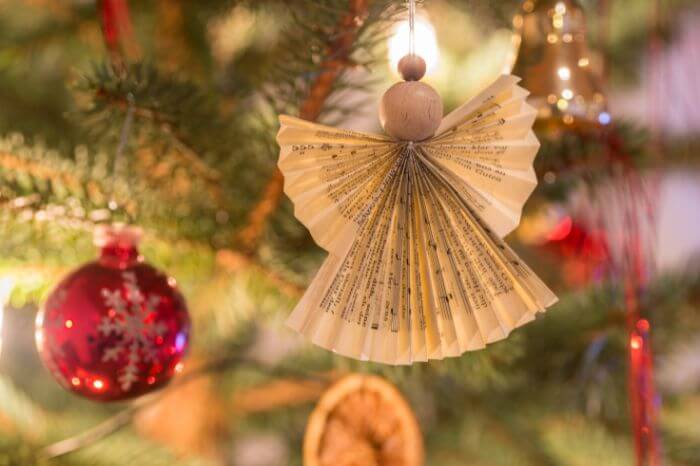 Angels are not really exclusive to German when it comes to festive decorations. However, angels are one of the biggest German Christmas traditions as many people will have more angels than any other kind of decoration in their homes!

If you are planning a German-themed Christmas this year, you could start this angel tradition this year! 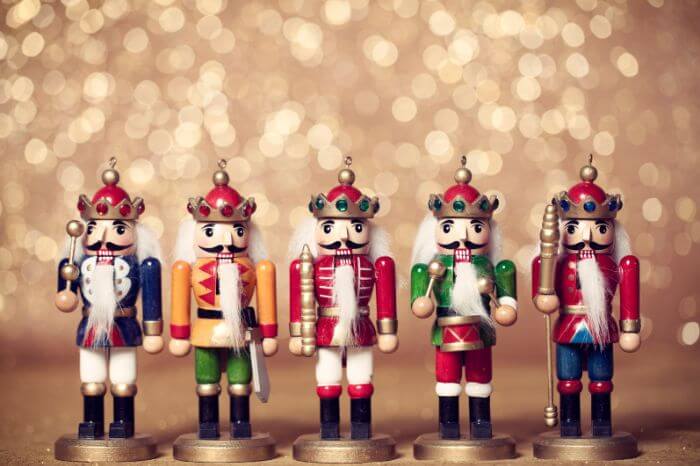 A good thing about deciding to follow more German Christmas traditions is that you do not have to do much out of the ordinary when it comes to decorating your home. For the most part, families in German decorate their homes in a very similar fashion to the way people in the USA do.

Lots of lights, hanging decorations and so on.

Ahh food, if there is one thing that we all know about Germany it is that they love their food! 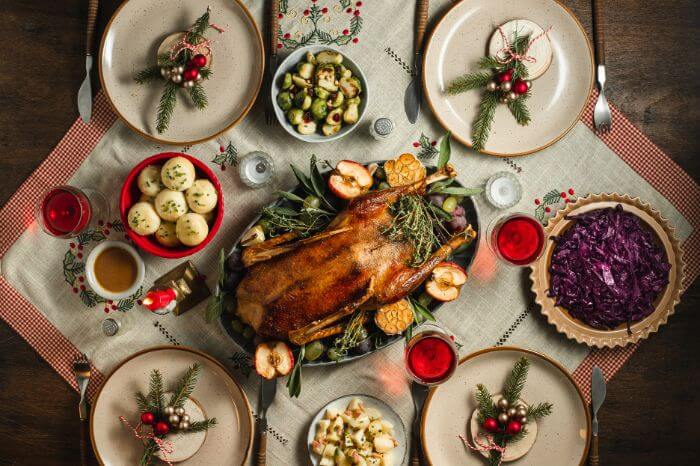 The main event when it comes to Christmas dinner in Germany usually features duck, goose, rabbit, or a traditional roast as the main dish. Things such as an apple and sausage stuffing are used as well. Potatoes are also very popular as a side dish.

German Christmas Snacks And Side Dishes

The good news here is that you pretty much have free reign to serve up what you want when it comes to things like appetizers and side dishes. If you want to stick with the authentic German experience though, some large and tasty German-style hotdogs would be sure to go down as a real treat.

Mash potatoes, cabbage, Brussel sprouts, and other traditional favorites that you already know and love are also popular in Germany.

Now, this is what we are talking about. Germany is known as the land of chocolate and it is fair to say that no one does desserts as well as the Germans do!

They have so many great traditions when it comes to desserts that it would be impossible to list them all, but we are going to have a look at some of the most popular ones. 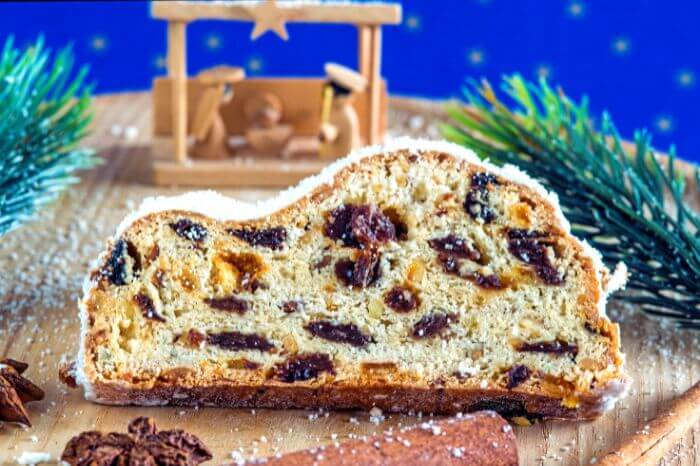 We had to start with Stollen, you cannot talk about German Christmas traditions and leave this off the list! This is a classic fruit bread that traditionally is made with candied fruit, nuts, spices, and a whole lot of powdered sugar.

The recipe can differ from person to person or place to place, but the core is usually the same.

What is great about Stollen is that it is one of the German traditions that has traveled the globe and most supermarkets will offer it during Christmas time! You cannot have a German-themed Christmas without stollen! 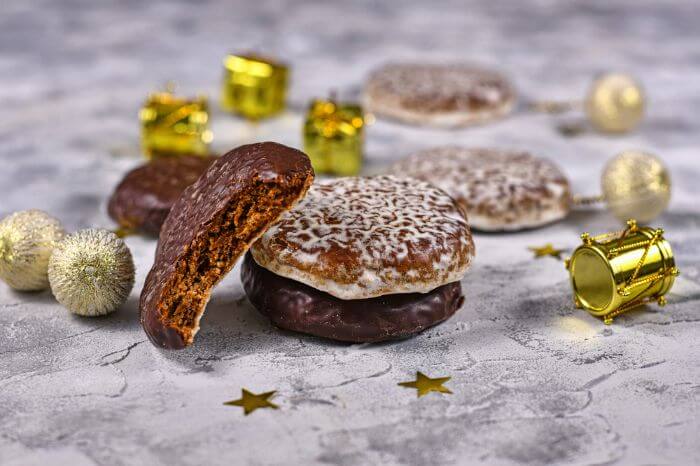 Just like stollen, Lebkuchen/ Pfefferkuchen is a firm favorite for most supermarkets all around the world during the holidays. This one is known by two names, but they are the same thing. This is a tremendous German cake that has about a million cups of sugar on the top. This has become a firm favorite all around the world, but it is still a real staple of a good Christmas in Germany!

Many German Christmas markets will specialize in German chocolate so be sure to take advantage of it while you can.

That is right, cookies at Christmas time in Germany is such a big deal we had to give cookies their own special section. There are over 20 traditional styles of German Christmas cookies and here we have some of the most popular.

These are almond-flavored cookies and they tend to be made in pretty big batches as the cookies more often than not are small. People can have fun by putting these in all kinds of fun festive shapes. These do not require many ingredients and they only take about 90 minutes at most to make a batch. 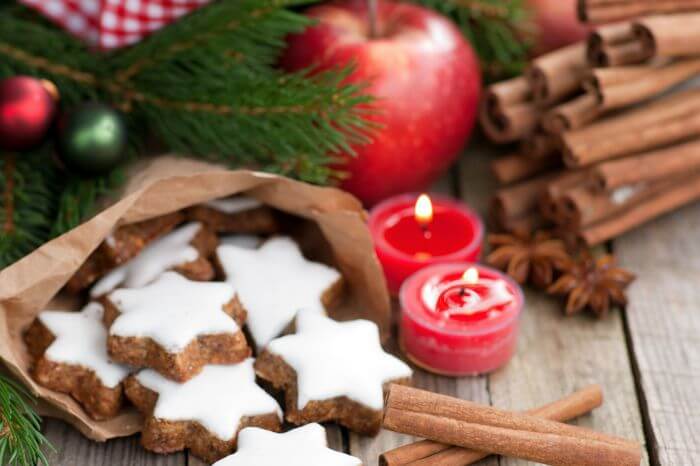 Ahh, this is what most people are thinking of when they think of German Christmas cookies. These are one of the tastiest German Christmas traditions around. These are cinnamon-based cookies that are nice and easy to bake and thanks to the cinnamon, they have that perfect kick that makes them go great with tea or coffee. Of course, cutting these into star shapes is a must! 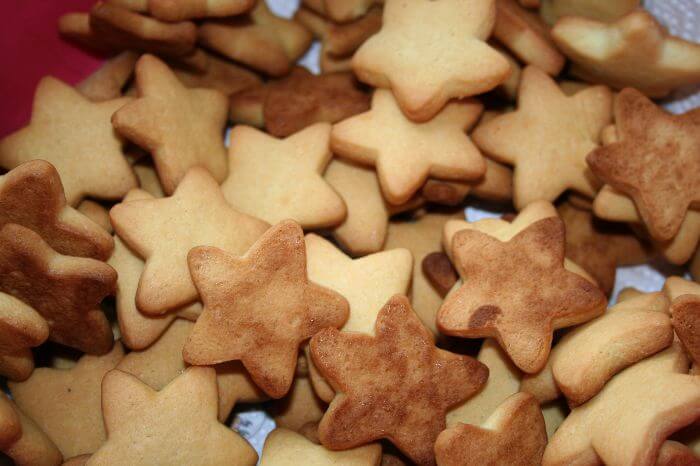 These are also known as Emperor Cookies and these are a real favorite treat! These are sugar-based cookies that are traditionally baked in three shapes, stars, rounds, and hearts. The twist here is that they are filled with raspberry or strawberry jam which with all the sugar that also goes into these makes these some very tasty and sweet cookies!

Now, these are awesome. Chocolate Spice Bars may be a bit more complex to make as they have more ingredients, but these chocolate-infused cookies are the stuff of legend for many German households.

These have a fun tradition about them where people say that you are supposed to cook them and then leave them sitting in a metal jar for a couple of days to really bring out the flavor.

Hasn’t a German Christmas market been talked about in every section so far? Well, yes it has, but there is a good reason for it!

Celebrating Christmas in Germany means that you get to drink some epic tasty stuff and that is what we are taking a look at here. 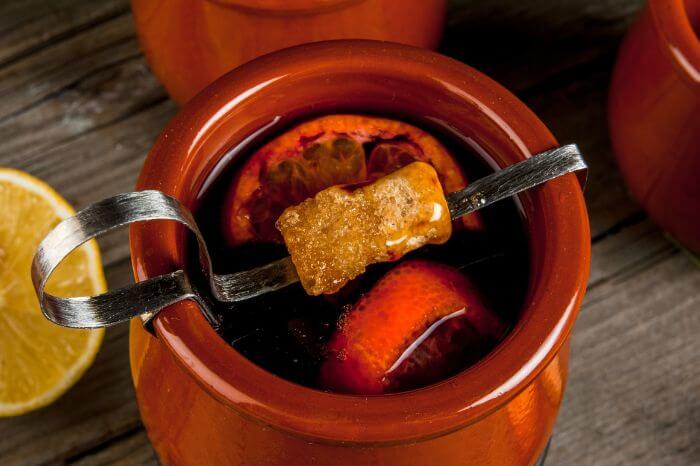 While the name may be a mouthful, Feuerzangenbowle is a very popular drink in Germany during the holidays. This basically translates to Fire Tongs Punch! This is a drink that is not for the faint of heart as it is comprised of rum, wine, and usually some kind of fruit juice. Many people compare it to mulled wine (another German favorite) but with a lot more heat! 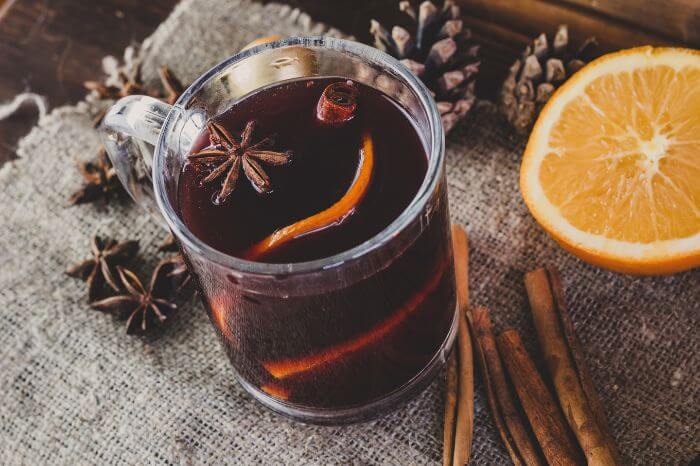 To be honest with you, we could have a whole section dedicated to mulled wine as it is a real favorite when it comes to German Christmas traditions. Thankfully, many supermarkets once November rolls around will start stocking different types of mulled wine.

Of course, if you wanted something a bit more “authentic” you could always head to a German Christmas market, many of which will offer tasters which is pretty awesome!

Kinderpunsch is also known as children’s punch as there is no alcohol in it. The mixture of what this is will differ, but it usually revolves around having fruit tea mixed with fruit juice, cinnamon, cloves, vanilla, and sugar.

This can be a fun way to let the kids think that they are having mulled wine without having to call them a cab to take them back to their treehouse!

Sure, the name makes you think of something someone in a fantasy movie would drink, but grog is one of the more interesting things that is drunk during Christmas in Germany.

This is a mixture of run water and sugar which sounds pretty basic. However, the kicker here is that it is drunk hot, not just warm, but very, very hot!

This is a real staple of Christmas in Germany and it’s perfect to get you warmed up.

They sure do love their beer in Germany and the most popular beer is Krombacher so that is what you will want to be drinking if you want to ensure you are having what most beer drinkers in Germany will be enjoying during the holidays.

A few other popular German beers include Carlsberg and Becks which are very popular all over the world and very easy to get in most places that sell alcohol.

As you have seen, German Christmas traditions are not very dissimilar to the way people in the UK, Canada, and the USA celebrate things! This means that throwing a German Christmas party can be quite easy, especially as many supermarkets will carry various German Christmas food, desserts, and drinks during the holidays.

If you do plan on having a German-themed Christmas this year, just make sure that you make sure family, friends, love, and goodwill are at the center of all your festivities…… if not Krampus may show up, and then you will find yourself in some real trouble! 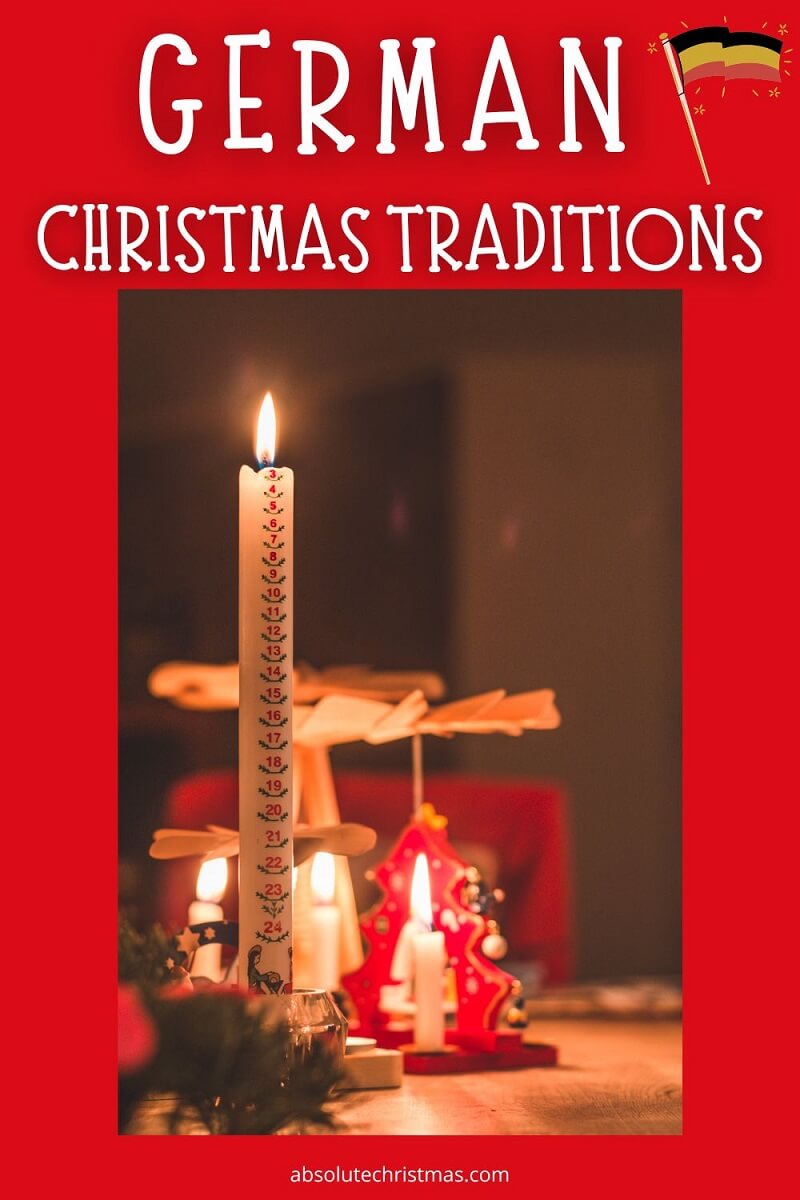 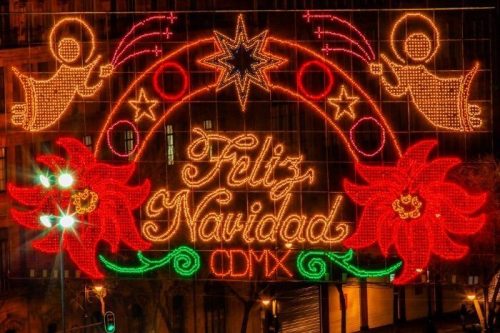 Mexican Christmas Traditions – How Christmas Is Celebrated In Mexico 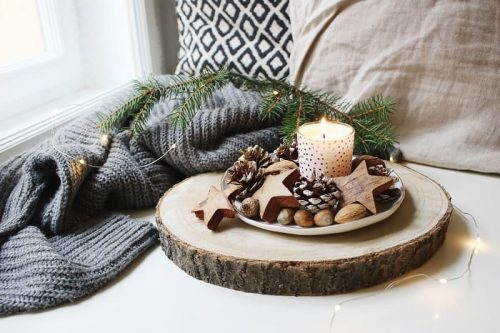 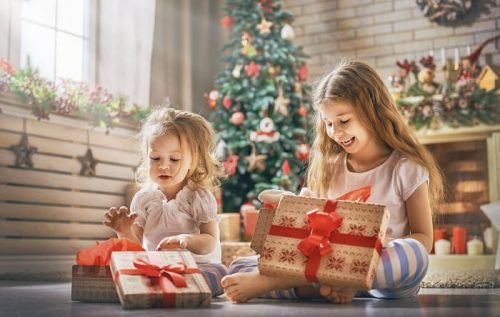 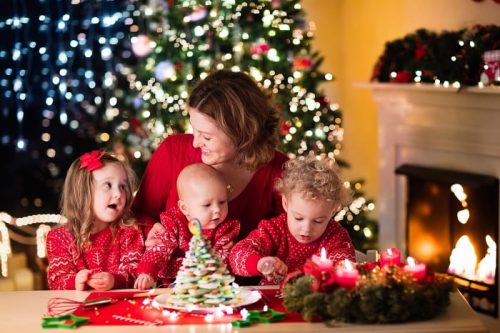 25 Christmas Eve Activities That Your Family Will Love