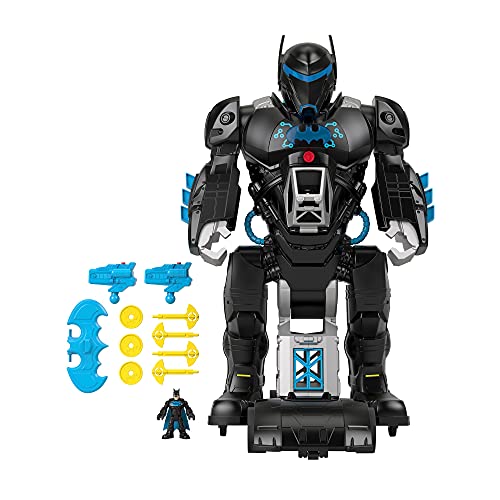 Batman toys do not get much more epic than this Fisher-Price Imaginext Transforming 2-in-1 Batbot! This is one of the largest and most interactive sets in the Imaginext Batman range.

It features a giant Batbot, but when The Joker is on the run, it can transform into an awesome giant Batmobile robot!

BATMAN Interactive Gauntlet with Over 15 Phrases and Sounds 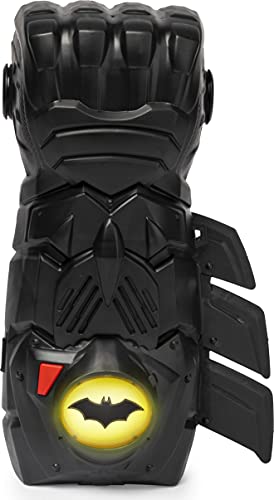 With this BATMAN, Interactive Gauntlet with Over 15 Phrases and Sounds, little Dark Knights can run all around the house pretending that they are Batman.

This is a lot of fun and it can make all kinds of awesome sounds so that they can have fun pretending they are chasing down all of the classic villains in Gotham City! 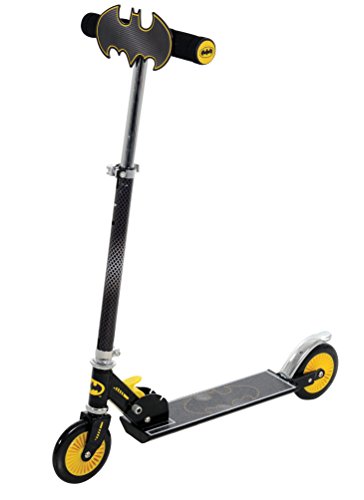 What makes this Batman Folding Scooter one of the best Batman toys around is that it has that classic Batman style.

However, this also encourages them to play outside and the scooter is designed to take a bit of a beating so no worries if they have to go on a mission to track down Two-Face and The Riddler.

The Lego Batman series is very popular with kids and this LEGO DC Mobile Bat Base is one of the coolest sets in the whole range.

With this, Batman, Nightwing, and Batgirl are able to take the Batcave with them wherever they go! Children are going to love putting this together and then coming up with their own fun stories to play! 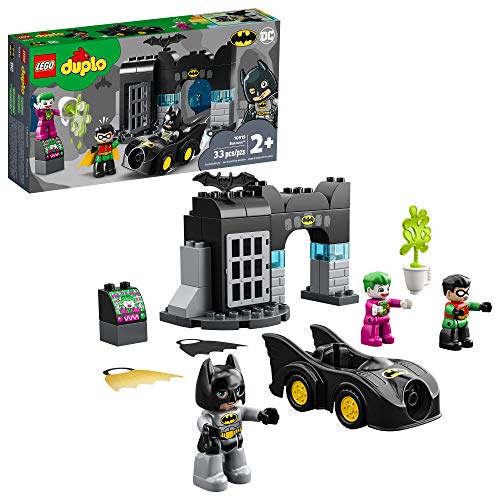 What we have here with the LEGO DUPLO Batman Batcave is one of the cutest Batman toys on this entire list!

This comes with LEGO Duplo figures of Batman, Robin, and The Joker. It also includes a Batmobile and a little Batcave playset that they can have a ton of fun building too! 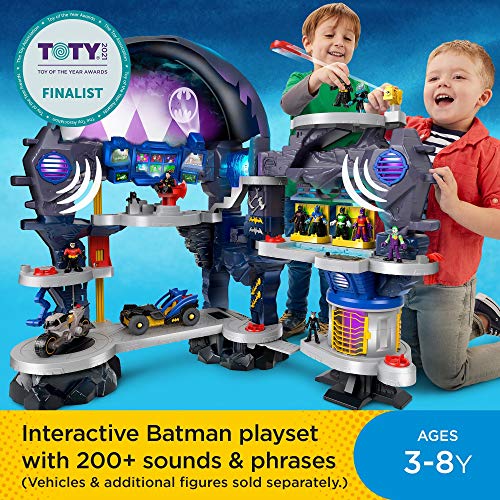 o far, the Fisher-Price Imaginext Super Surround Batcave is the largest playset that Imaginext has produced.

This thing is insane! It features multiple levels, tons of play features, it makes epic sound effects and it even comes with Batman, Robin, The Joker, Catwoman and Mr. Freeze. Kids are going to have an awesome time playing with this! 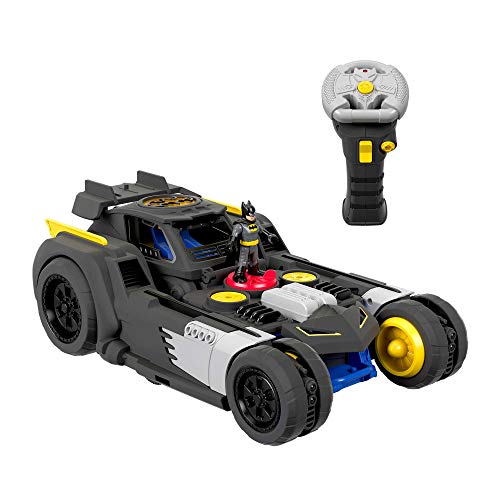 All of the villains of Gotham City are in big trouble thanks to this Fisher-Price Imaginext RC Transforming Batmobile!

They can directly control this with the little remote control and they can drive it and use all of its fun features too. It can even transform into a very cool Batcave style playset and comes with a Batman figure! 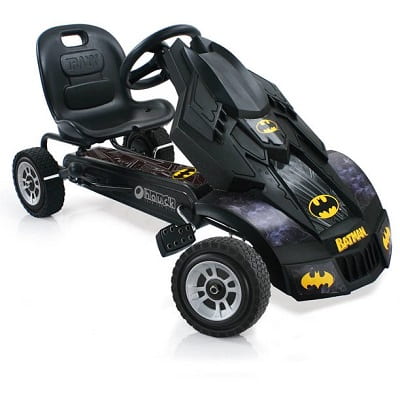 Hit the streets of Gotham in this amazing Hauck Batmobile Pedal Go Kart!

This is very, very cool and something that they are going to have a ton of fun with. This Go Kart features a very smart Batman design and it can go very fast! It has an adjustable seat so they can use this for many years.

This Batman E-Cruiser Ride-On Car is really going to blow their mind as it will well and truly make them feel like they are Batman!

They can drive this all around the yard and it makes many fun sounds. Any child that loves to pretend to be Batman is going to have a ton of fun with this! 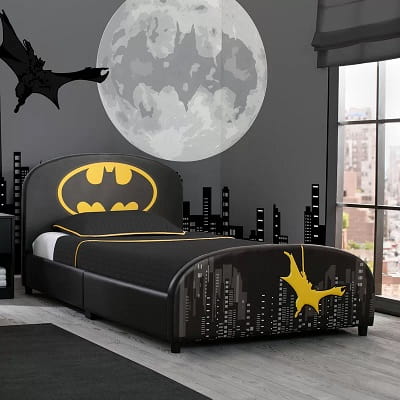 Bedtime becomes even more fun thanks to this DC Comics Batman Twin Platform Bed. This bed features the classic Batman logo as well as a silhouette of Batman gliding through Gotham City.

Any little Batman fan is going to love resting their head here after a hard day at school or chasing down The Joker and Harley Quinn! 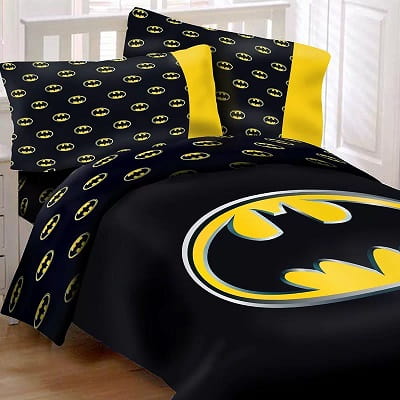 Not only does this look really cool and will go great with their other Batman stuff. It is very soft, comfortable, and perfect for making sure they get a good night’s rest before another day of school…. Or crime fighting!

This Push and Pedal Batman Trike is a great gift idea for a little caped crusader. This bike is yellow and black, plus it features Batman logos all over it.

It has a seatbelt and when they get tired chasing down The Penguin. They can rest their feet as you can become Alfred and push the bike for them thanks to the handle on the back! 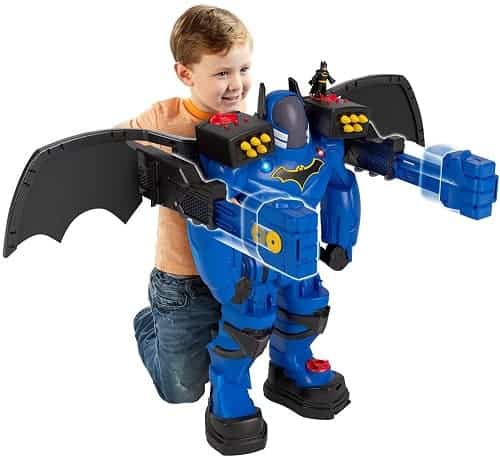 The ultra cool Batbot Xtreme is the latest addition to the Imaginext DC Super Friends line and also one of the most impressive ones. The feature-loaded Batbot Xtreme is nearly 3 feet wide when its wings are spread and over two feet tall.

The totally awesome Batbot Xtreme is by far one of the coolest Batman toys for kids ever! Tons of fun guaranteed! 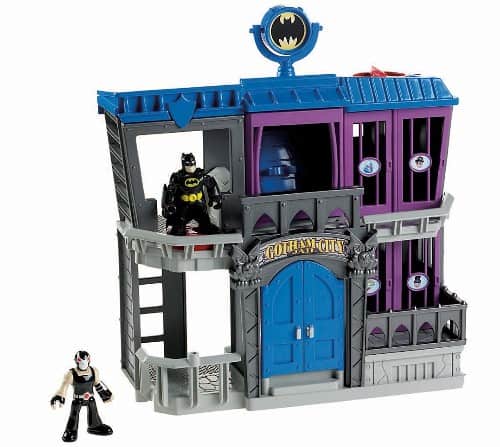 The first thing on our Batman toys for kids list is the awesome Imaginext DC Super Friends Gotham City Jail.

This is one great playset.  The Gotham city Jail also has four different jail cells. One for Riddler, Penguin, Joker, and Mr. Freeze. There’s also a special jail cell for Bane and when you put him in and turn the switch his body lights up. Only Batman can open these cells thanks to the mechanism on the roof of the jail. So when he captures a villain they are locked up for good.

However, your child better watch out as Bane has been known to break out and try and free the other villains! This set comes with a Batman and a Bane figure it’s aimed at kids three and up and as this is part of the Imaginext line it’s very, very strong and will last for many years. 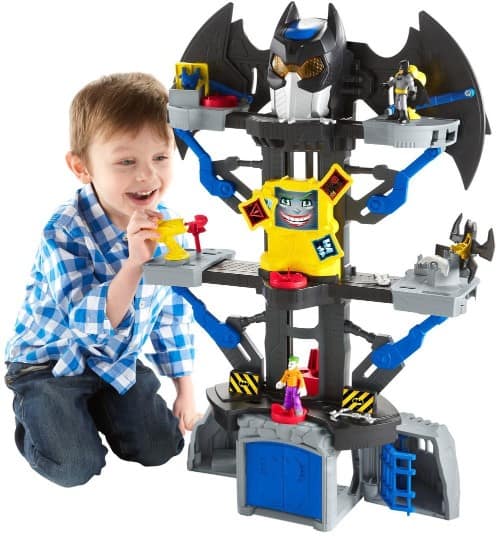 Imaginext has made a few different Batcave’s, but we feel that the Imaginext DC Super Friends Transforming Batcave is the very best!

This is one of the larger playsets in the Imaginext line and it can actually transform. You can raise it up, lift the wings to make it look like a bat.

There is plenty of little twists and turn pads that Batman & Robin can activate to do different things like opening the door or turning on the computer.

It even comes with a Bat Launcher so if any enemies like Two-Face or Harley Quinn try to get in, Batman can blast them!

The transforming Batcave comes with two Imaginext figures, Batman and Joker. The recommended age of this playset is 3 and up and we can assure you, your kids will have a great time with it. 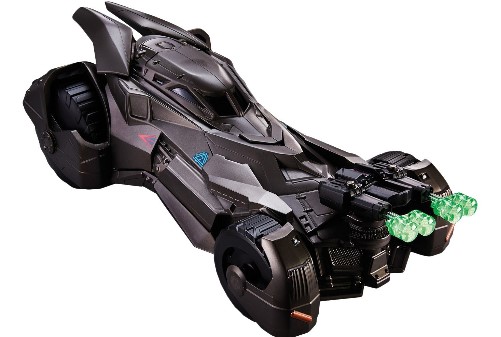 Batman v Superman was a great movie and one of the best things about it was the Batmobile. Well, the Dawn of Justice Epic Strike Batmobile is like the one from movies, but a super pumped-up version! As this Batmobile is designed to go up against the Man Of Steel.

The Epic Strike Batmobile comes with two Kryptonite missiles that will help slow Superman down. This Batmobile fits all the 6-inch figures from the Batman v Superman line. So Batman, Superman, Wonder Woman, and Aquaman will all fit in here.

The toy is aimed at kids aged 3 and up and as awesome as it is, it is worth noting that it does not come with a Batman action figure so be sure to pick one up when you get this. 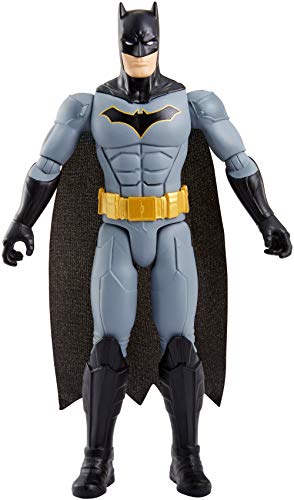 This Batman Action Figure by Mattel is a really smart representation of The Dark Knight. This is actually part of the Titan Heroes series which includes characters from not just DC, but also Marvel and Star Wars so if your child has any of them this Batman will fight right in.

At 12 inches tall this is a really tall and brooding Dark Knight figure that kids will really like.

It’s actually so cool that some dads might try and hire the Penguin to steal it for them!

With 9 points of articulation and a fully flowing cape, this is one toy that is going to make sure no one else in the toy box steps out of line.

Also, this is a very reasonably priced action figure so it would make for a great extra gift or a stocking stuffer at Christmas. 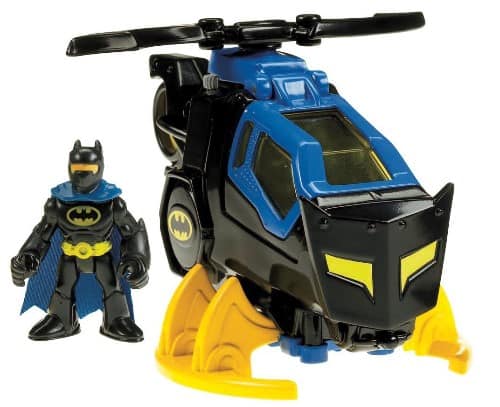 This set comes with a Batman figure and this Batman is ready for flight as he is wearing a helmet. The actual Batcopter is really cool. It features rotating blades and it can even pounce on the bad guys to capture them! The little cockpit opens up and can fit in Batman or one of his other super buddies like Superman, The Flash and Green Lantern.

The Batcopter is made to the same high standards as the rest of the Imaginext line so it will be able to take a real beating. Like other Imaginext toys this one is recommended for kids aged 3 and up. 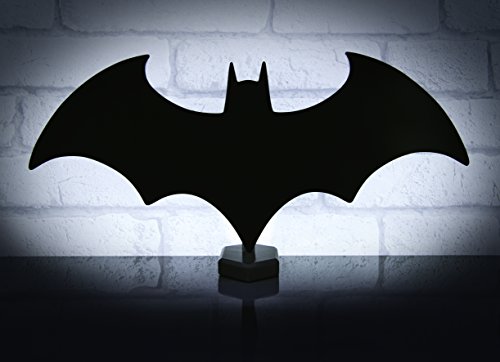 If you have a child who loves Batman then this would be a great accessory for their bedroom.

The DC Super Friends RC Transforming Batbot is one of the more interesting parts of the Imaginext DC Super Friends line. Sometimes Batman needs a little backup when taking on a big villain like Killer Croc, Clayface, or Doomsday. So that is where this incredible Batbot comes in.

This is an RC vehicle that can be controlled with the included controller. With this, your child can make it go from small to large and make it walk forward! It even has a disc launcher to help take down the bad guys. It lights up, makes tons of cool noises, and even has a cockpit for the included Imaginext Batman figure to sit in.

The transforming Batbot really is one of the crown jewels in the Imaginext DC Super Friends line. Even with all the cool stuff, this does it’s still safe for kids as young as 3. 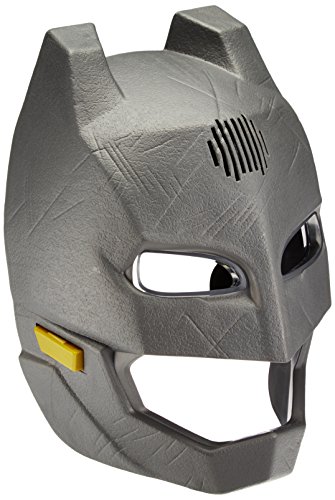 Here we have one of the evergreen Batman toys for kids, this cool Batman voice-changing helmet. One of the things that Batman is known for is his tough-guy voice. It can be kind of hard to have a tough guy voice when you are 5 but do not worry as the Batman Voice-Changer Helmet will have your child-scaring villains straight in no time.

Based on the way Batman looked in the Batman v Superman movie. This comfortably straps onto your child’s head and then with the push of a button makes their voice all deep and gravelly, just like Batman!

The Batman voice changer helmet is something they are sure to have a lot of fun with. In addition to changing their voice the helmet lights up and makes all kinds of cool sound effects. This would make a great gift for any Batman fan aged 4-10. 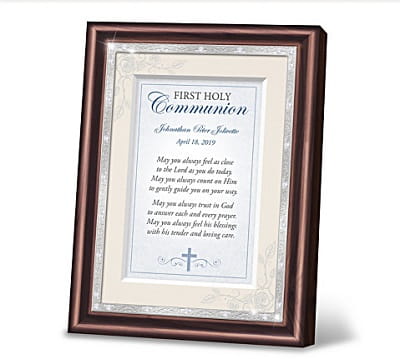 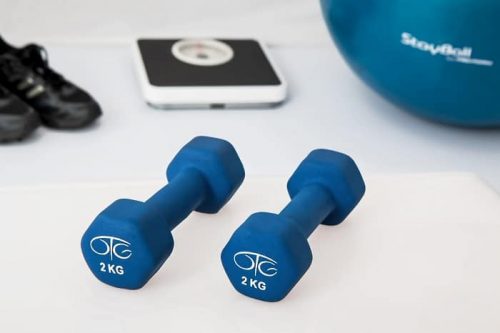 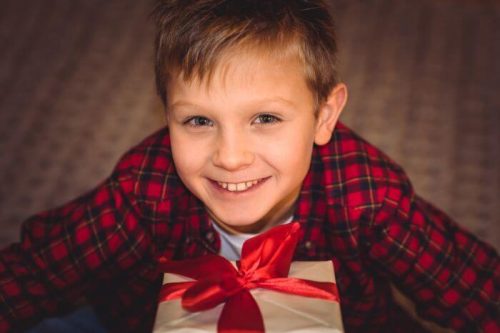 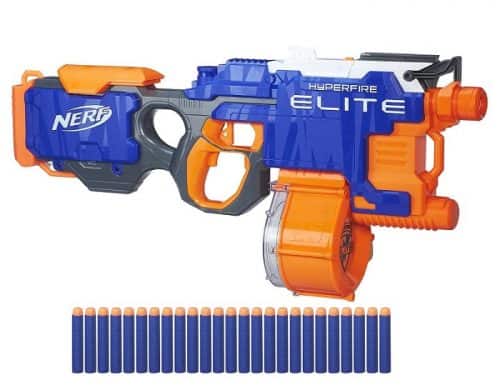