These are the greatest Breaking Bad gifts around! What is cool about our Breaking bad gift ideas is that you do not have to get involved with drug kingpins or sketchy dudes selling meth in an ally to purchase them! 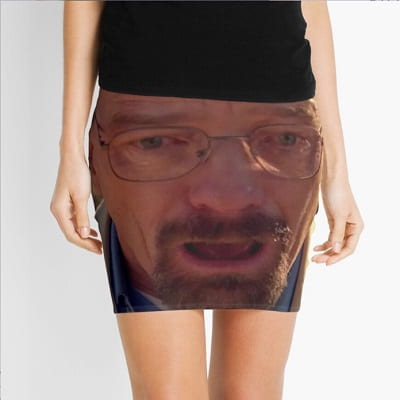 Gifts for breaking bad fans do not get much more nuts than this mini skirt. This is a mini skirt that is made with a massive picture of Walter white’s face.

It is taken from the popular meme that is used all over the internet so they are sure to get a real laugh out of just how weird and absurd this gift is.

I Am The One Who Knocks Doormat 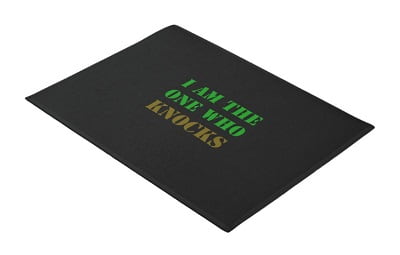 Check out this awesome doormat that features the classic “I am the one who knocks” phrase from the show. What makes this one of the best Breaking Bad gifts is that it is something which shows their love for the show, but at the same time it is also something that is practical as well. 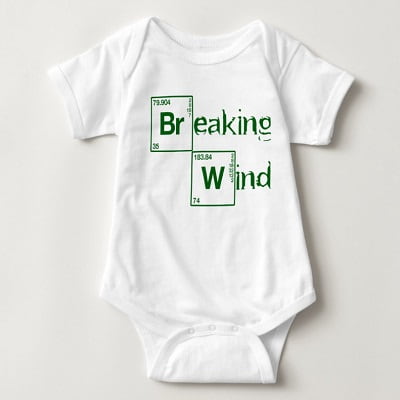 For the Breaking Bad fan that has a little bundle of joy, they can have some fun by getting them to wear this hilarious Breaking Wind baby bodysuit.

It is done in the same style as the Breaking Bad logo and at first glance, people will think it is that! It is not until you look closer you appreciate the clever and amusing pun. 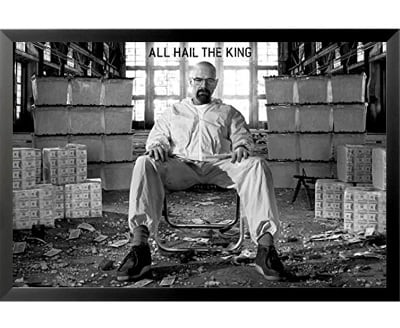 Walter white truly is one of the most iconic TV characters of all time. He was such a complicated and amazing character that even years after the show ended people talk about him.

This huge piece of wall art looks awesome as it features Walt sitting with piles of cash around him. You can pick between two different sizes. 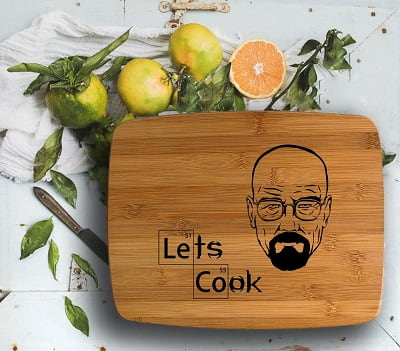 This Breaking Bad Cutting Board is one of the more useful gifts for Breaking Bad fans, especially if they like to cook… food we are talking about not meth!

It is made from high-quality wood and features a portrait of Walter White along with the slogan, let’s cook in the Breaking Bad font which is really cool and fun. 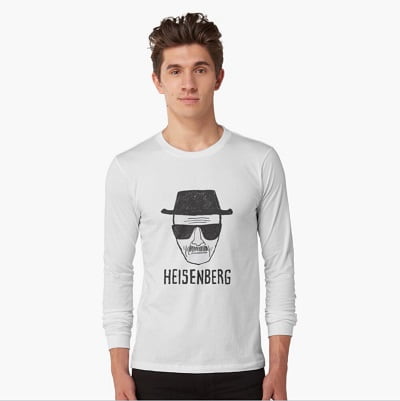 This Heisenberg Drawing T-Shirt is perfect for someone who loves the show. It features the drawing of Heisenberg from the TV series so they will really get a kick out of that.

It is also one of the more “for everyone” Breaking Bad gifts as you can choose between not just different sizes, but the actual color of the shirt too.

Just because we are talking about Breaking Bad does not mean we have forgotten about Jimmy! Better Call Saul is the tremendous prequel to Breaking Bad and this set of four coasters is going to be very well appreciated by a Breaking Bad fan.

They are designed to look like the cards Jimmy would give a potential client! 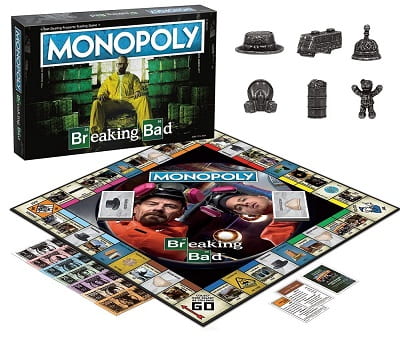 You get a Monopoly game for pretty much everything these days so it should come as no surprise that there is one for Breaking Bad! The Breaking Bad twist here is really cool, you have Walter White and Heisenberg cards and the money has Walt on it!

Plus, the pieces are really cool such as the RV, Heisenberg’s hat, and more. 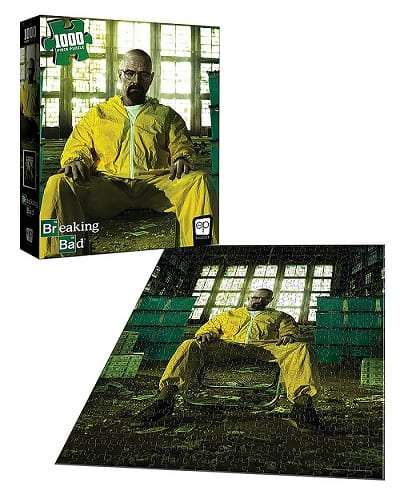 Walt sitting in front of the pile of money is one of the most iconic promo images from the show. This 1000 piece jigsaw puzzle features that image and it is one heck of a challenging puzzle to put together.

What really makes this one of the best gifts for Breaking Bad fans is that it looks so cool, they could frame and display it once they are done. 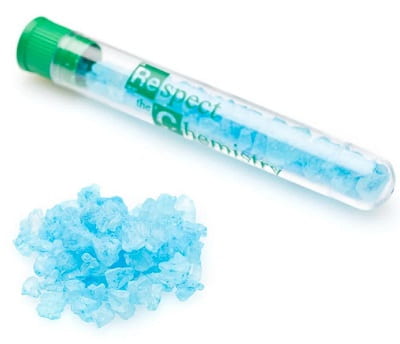 Now, this is a neat gift idea for a Breaking Bad fan, especially a Breaking Bad fan that also has a bit of a sweet tooth. These “test tubes” are filled with blue candy that looks just like the stuff Walt and Jesse would cook in the show.

It tastes super sweet and the little test tube is a fun collectible they can have on display too. 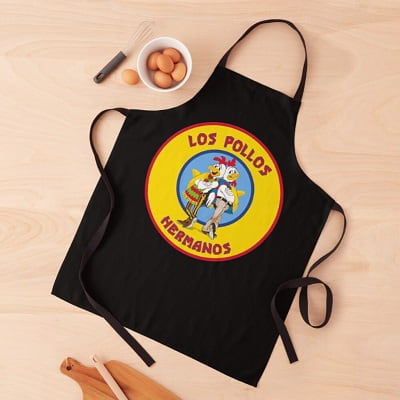 Who doesn’t love the Los Pollos Hermanos logo? The scene where Walt and Gus talk for the first time in the restaurant is truly iconic stuff!

This is a fun kitchen apron that has the Los Pollos Hermanos logo on it and they can whip up all kinds of tasty treats all the while keeping their clothes protected and showing off their love for the show.

Walter White’s “I’m The One Who Cooks” T-Shirt 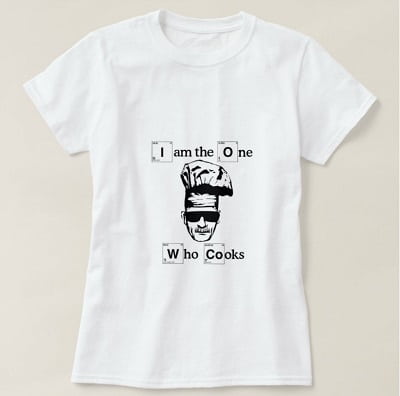 Not only is this funny, but it is also true as he was the cook in the show after all! 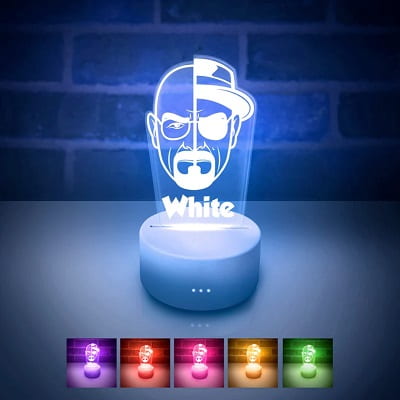 Available in two different sizes, this Breaking Bad Light is one of the most eye-catching gifts for Breaking Bad fans. Half of the face is Walter White and the other half is Heisenberg.

Seeing these two parts of him come together for this light really is cool. It can also change to all kinds of funky colors which is awesome. 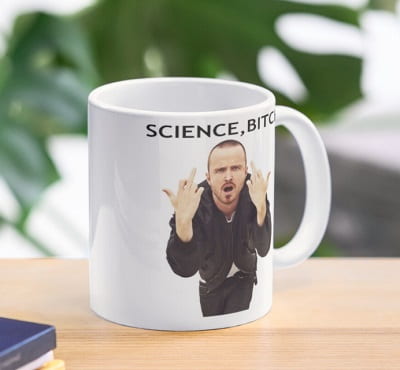 Ahh, Jesse Pinkman, the street hustler who kind of had a heart of gold and wanted to live a good life. He was also freaking hilarious and this Science Bitch Mug, features Jesse at his very best. With a nice clear image of Jesse giving the double bird, is there a better way to enjoy your morning coffee? 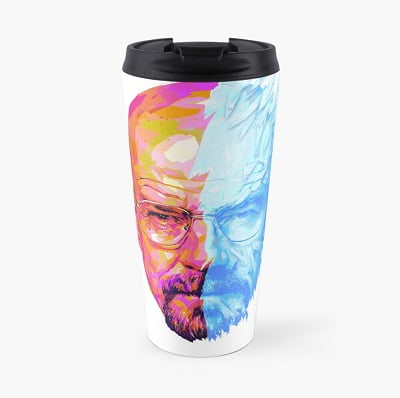 It features a very cool and stylized image of Walter White that has all these psychedelic colors going on! 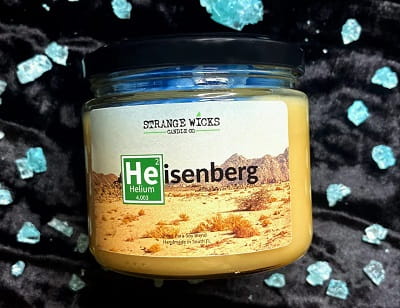 Now, this is a rather unique and unusual gift to get a Breaking Bad fan. This Heisenberg Candle has a very interesting aroma with hints of grapefruit, lime, and jasmine.

What makes it such a neat gift is that the jar has the desert from the show on it and the actual candle looks like the meth Walt and Jesse would cook! 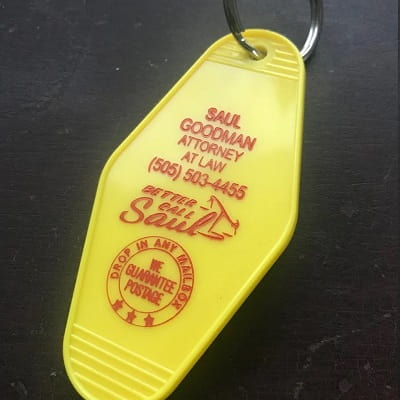 If you are looking for gifts for Breaking Bad fans that will not break the bank this key fob is just what you have been looking for. Taken from Better Call Saul, this is supposed to look like one of the calling cards that Saul/Jimmy would give to one of his potential clients.

It is not only fun; it makes grabbing their keys way easier too! 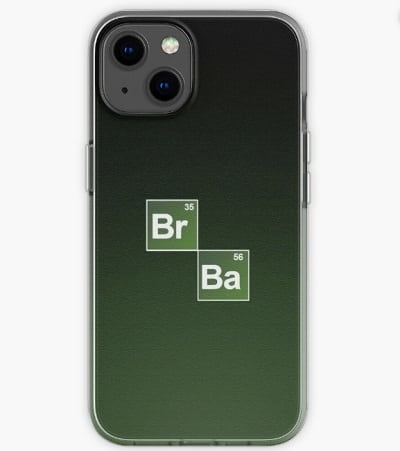 This Breaking Bad Logo iPhone Case is one of the more useful Breaking Bad gifts that we have on this list. It features the iconic Breaking Bad logo on it which is great.

It is also available for most models of iPhone as well. You can even select from three different types of phone case styles too! 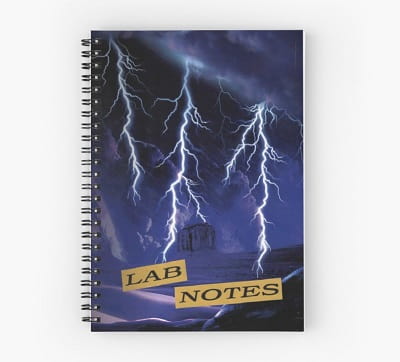 Most of the Breaking Bad merch that you will find is themed around the show’s logo, Walt or Jesse, but this Breaking Bad Spiral Notebook is something very cool.

This is actually designed to look like the notebook that Gale used! Oh, Gale, it is such a shame the way that things went down for you! 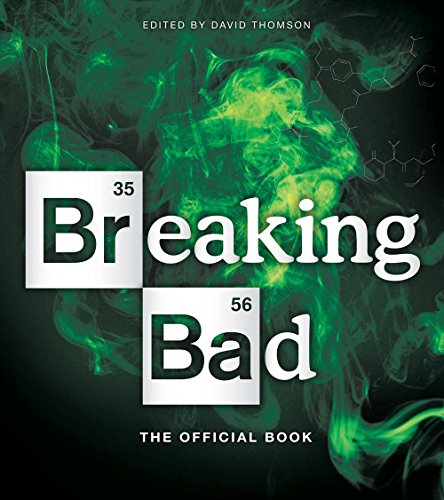 Any huge fan of the show is going to love reading this book from cover to cover. From profiles about the various characters and the actors who played them to behind-the-scenes information on the most iconic scenes and a ton of great photos, this really is the ultimate book for a Breaking Bad fan. 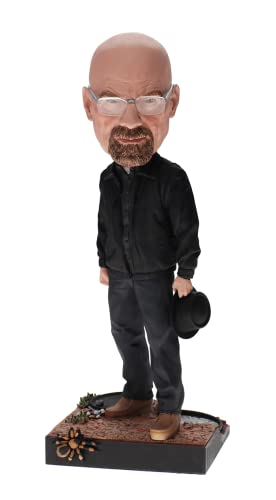 If you have been looking for Breaking Bad gifts that are fun and something that they can have out on display, this bobblehead really is the perfect gift.

It features a rather menacing looking Walter White (with an awesome likeness by the way) however, the large head and the way it bobbles are sure to also make them laugh! 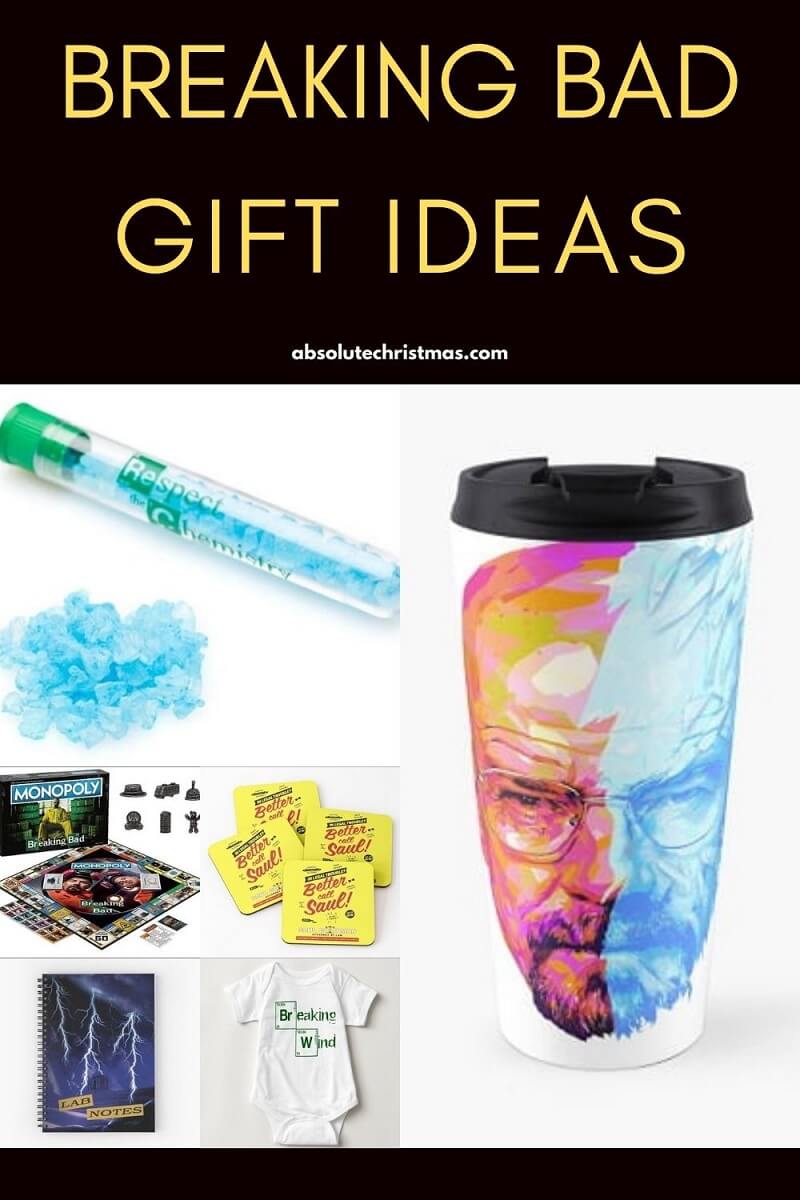 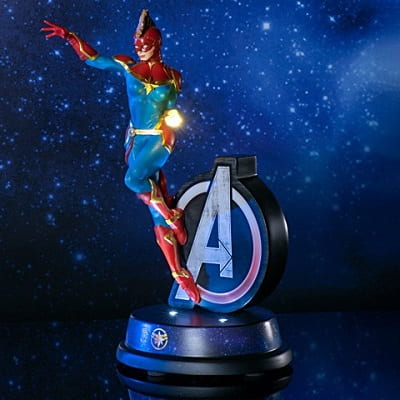 27 Marvel Gifts for Kids and Adults 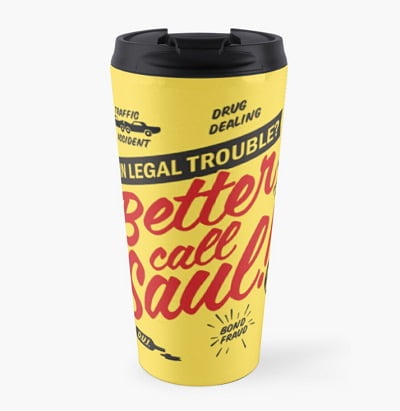 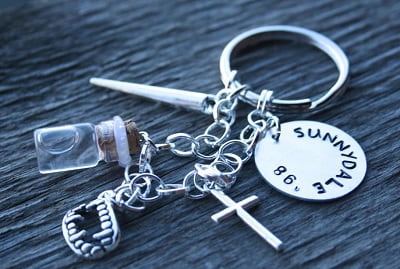 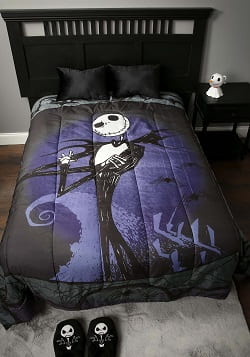