They may have lost Tom Brady, but they can still smile thanks to these awesome New England Patriots Gifts! There are some great Patriots gifts out there and we have cherrypicked the very best ones for you in the list down below. 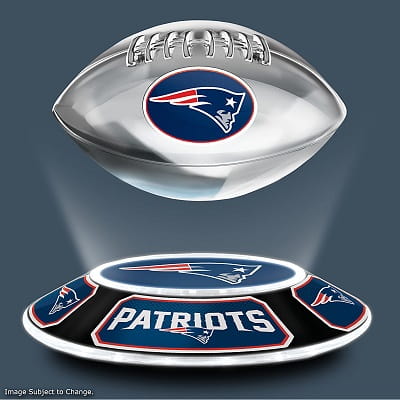 Next up we have one of the most amazing New England Patriots gifts! They will think that this thing has been thrown by Brady himself as it levitates in the air.

This is a great decorative piece for a Patriots fan that they will get a real kick out of having it on display. 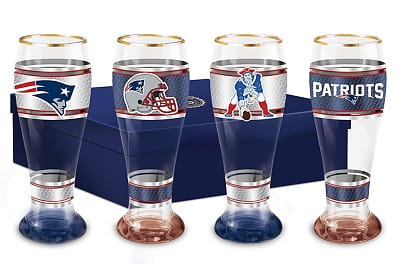 Now, this is a gift that has some real class about it! It comes in a nice gift box that makes it extra special.

Inside are four New England Patriots Beer glasses! Each one has a different Patriots theme on it. Having a halftime drink is going to be extra sweet out of one of these. 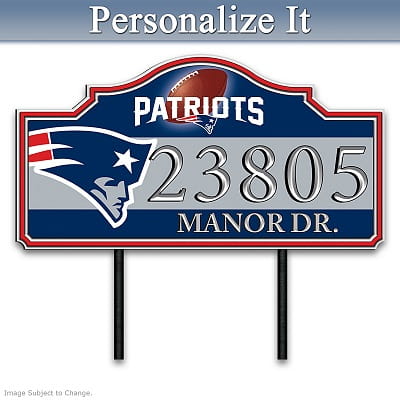 Let the whole neighborhood know that they are a Patriots fan with this fun outdoor address sign.

This has the New England Patriots logo on full display, but it also has their own home address. No way the mailman will fumble any packages when he sees this! 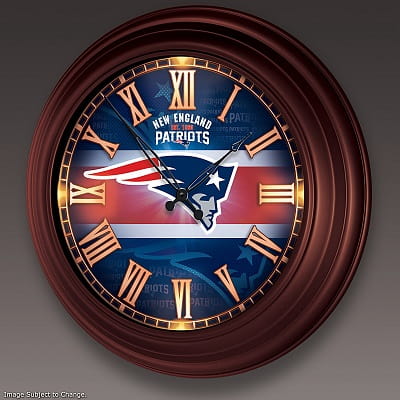 Finding the best gifts for a Patriots fan can be tough, but this clock could be just what you are looking for.

This will look awesome in any room! Not only is this practical as it will tell them the time, but it also looks super cool as well thanks to The Patriots logo on it. 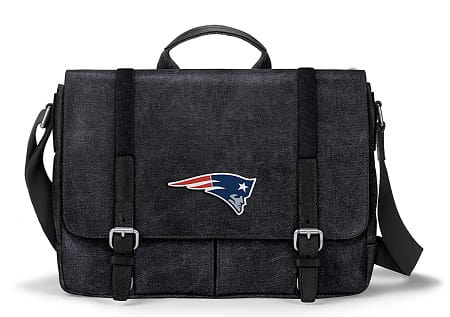 This messenger bag is one of the most stylish New England Patriots gifts on this entire list.

It has The Patriots logo and colors but in a much more scaled back and classy kind of way. No matter if this is for work, class, or just for fun, they will wear this bag with pride. 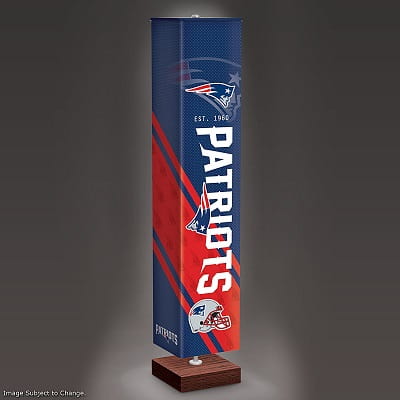 Gifts for a New England Patriots fan do not get much more classy than this!

No matter if it is in their man cave or right in the living room, if the wife says ok of course! This floor lamp is going to look awesome! It proudly displays The Patriots logo and gives the room a ton of ambiance too. 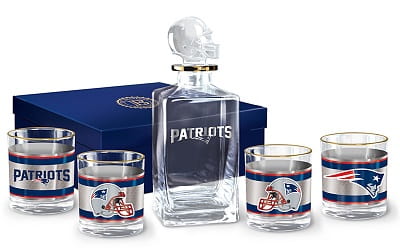 For The Patriots fan that likes to drink the good stuff, this is the perfect gift for them.

Included is a very classy Whiskey decanter that has The Patriots logo and an NFL helmet stopper. It comes with four Patriots themed whiskey glasses as well. 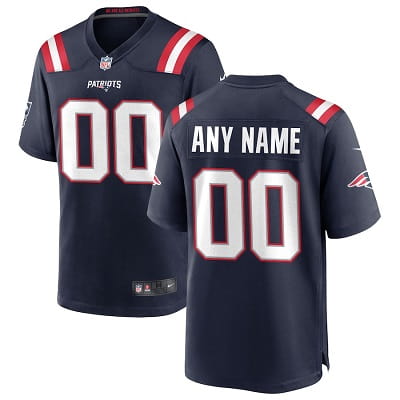 You cannot go wrong with a jersey when it comes to gifts for a New England Patriots fan.

No doubt they already have at least one Patriots jersey, but this one is extra special. You see, you can get their own name on the back of here so they will really feel like part of the team. 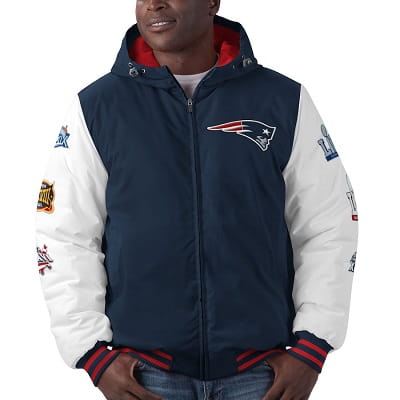 This is one of the best gifts for a Patriots fan. With this awesome New England Patriots Jacket, they can let people know that they support one of the most winning teams in Super Bowl history.

It is comfortable, nice, and warm, but it also lets them show off their Patriots pride! 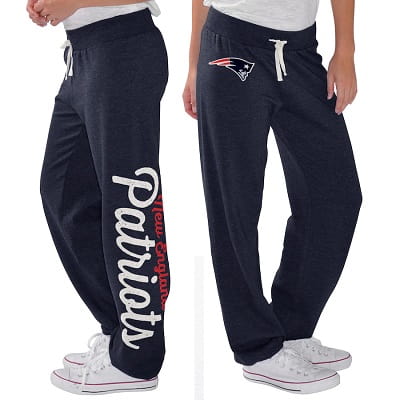 These fantastic fleece pants are one of the best New England Patriots gifts around. These come in sizes small to 2XL and they are perfect for when they are lounging around the house.

They are very stylish too so they will love to be seen in them! 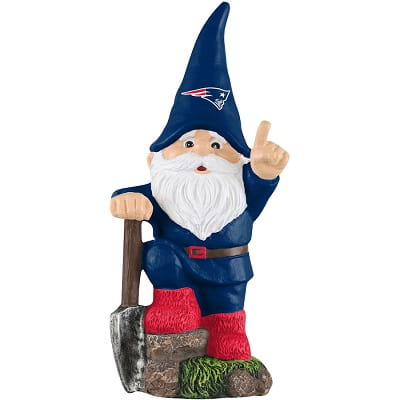 Is there a more fun gift than this New England Patriots Shovel Time Gnome? This little gnome is going to give the garden some real personality.

What makes this guy super cool is that along with being in Patriots colors, he is rocking a very smart looking Patriots gnome hat! 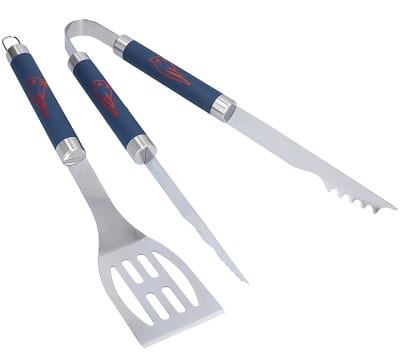 There will be no fumbling of the hot dogs or burgers ever again with this amazing New England Patriots BBQ Grill Utensil Set.

This comes with a spatula and tongs to make their BBQing much easier. The Patriots logo on them makes them pretty awesome too! 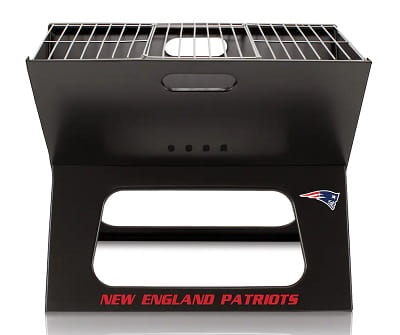 Any time can be BBQ time thanks to this amazing portable grill! This can fold up so that it fits into the Patriots themed bag!

The actual grill is perfect for making stuff like hot dogs, hamburgers and steaks, and the best part, it has the Patriots logo on it! 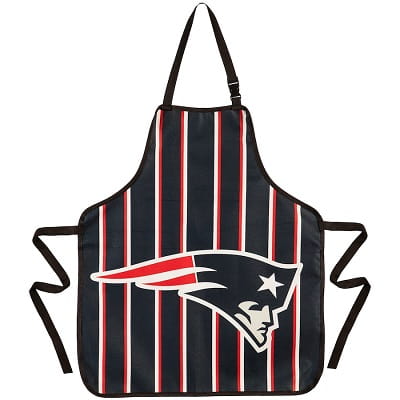 For someone who thinks they are the Mac Jones of the kitchen, this may be the perfect gift.

One side has the classic Patriots logo on it. On the other side, we have a fun football uniform that makes them look like they are playing for The Patriots. 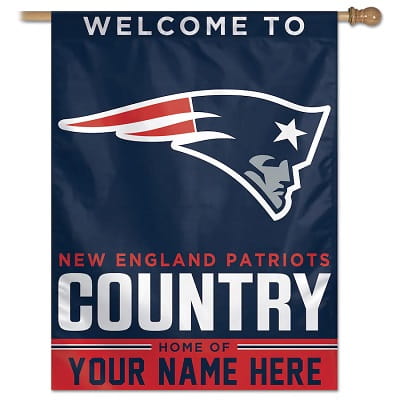 This New England Patriots Personalized Banner is going to look so cool in their home. It is the kind of thing that would look awesome in their man cave or games room.

It lets people know that their home is Patriots country! You can also get it personalized to make it extra special. 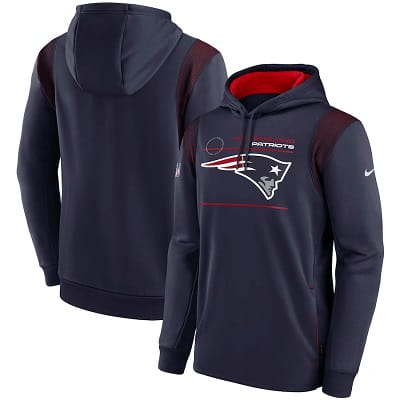 You cannot go wrong with a hoodie when it comes to Patriots gifts. This is one awesome and stylish hoodie!

It is made by Nike so it’s high-quality. It rocks the Patriots logo on the chest along with the classic Nike symbol on the sleeve. 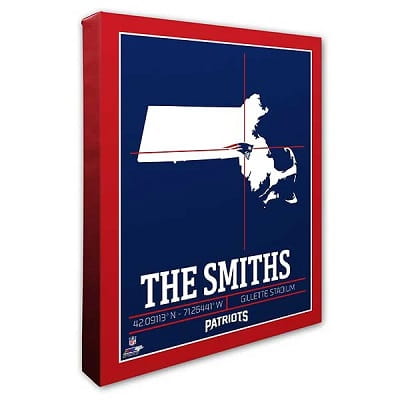 What is great about this canvas print is that it would look equally as good in the living room as it would the man cave!

This has the location of the stadium along with a silhouette of the state and of course The Patriots logo. You can even get their name printed on here too! 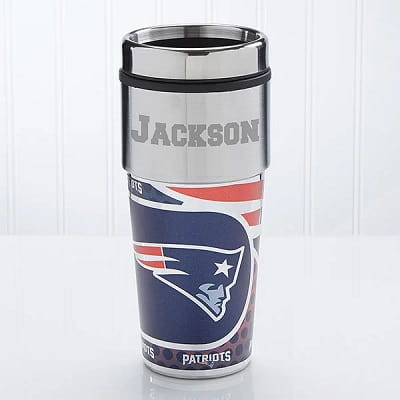 This New England Patriots travel mug will make sure their coffee stays nice and hot and does not end up spilled all over them on their way to work.

You can also get their name on here to make it a more personal gift. 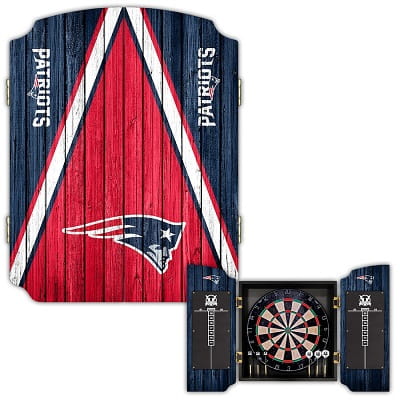 This New England Patriots Dartboard Cabinet would be the ultimate gift for a Patriots fan!

The dartboard cabinet is done in Patriots colors and the logo looks awesome! It has two scoreboards, two sets of darts and they are going to have a ton of fun with this! 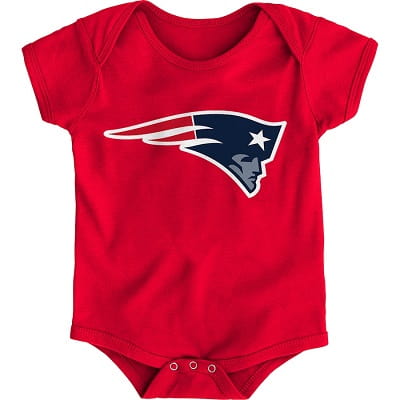 The little one is going to look so cute rolling and crawling around in this! 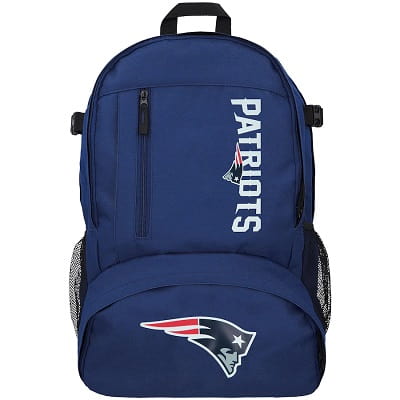 This smart looking Patriots backpack is perfect for school, for sports or for someone who goes out to work.

It has multiple storage compartments and rocks the Patriots logo! 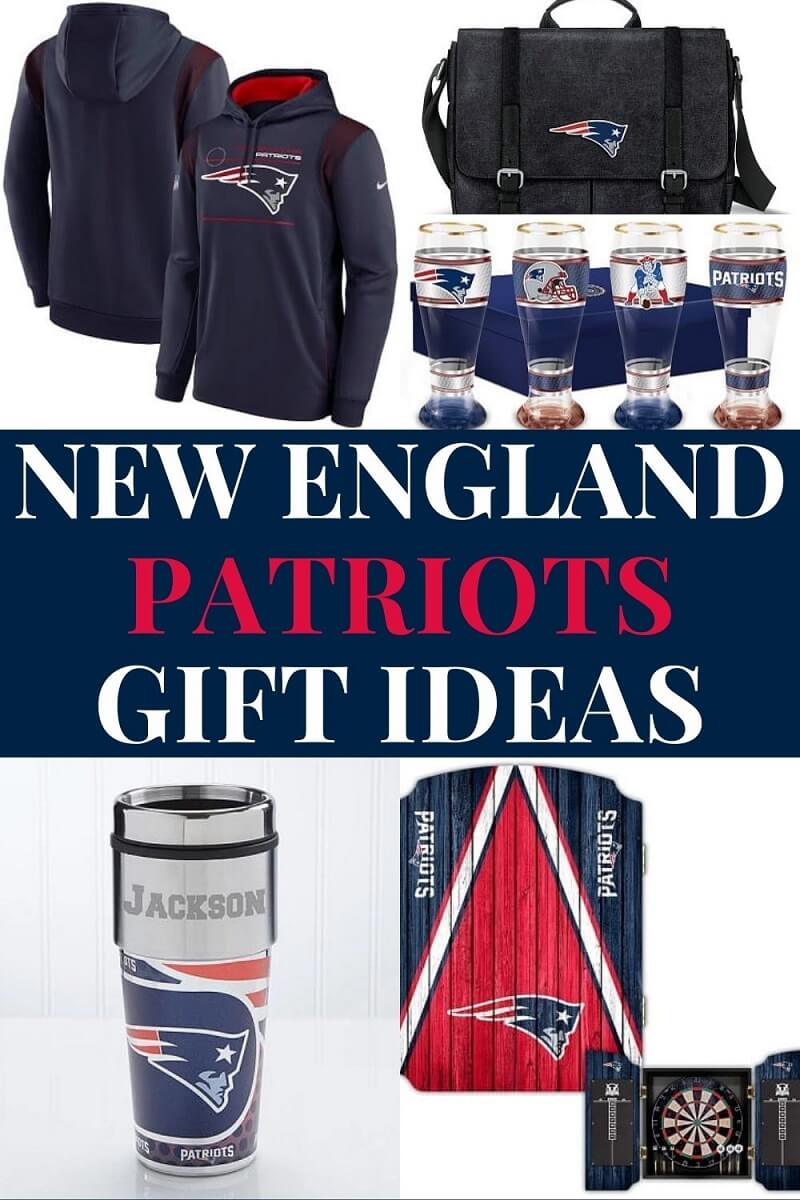 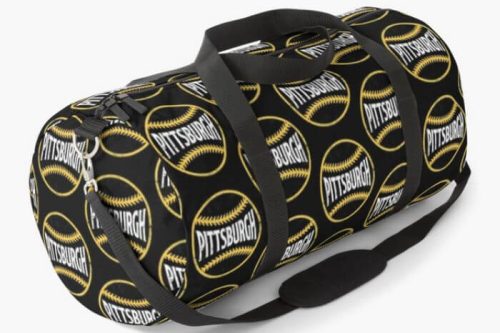 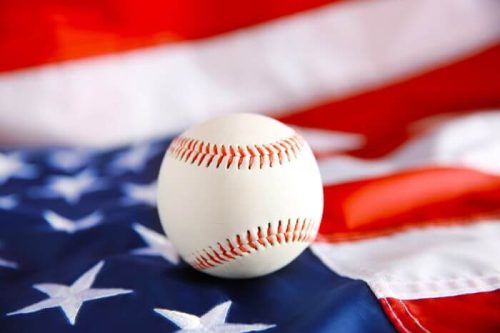 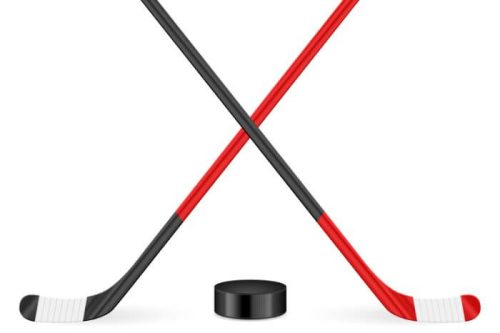 35 Hockey Gifts For Fans and Players 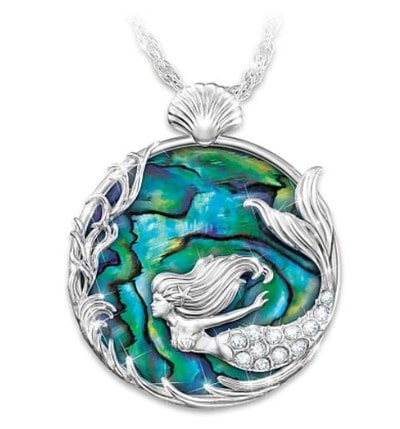